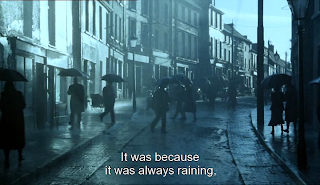 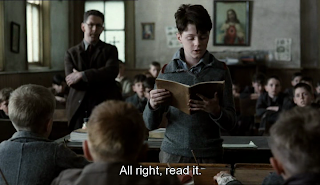 All right, read it.
"I don't think Jesus, who is our Lord, would have liked the weather in Limerick, because it's always raining and the Shannon keeps the whole city damp.
My father says the Shannon is a killer river...because it killed my two brothers. When you look at pictures of Jesus, He's always wandering around ancient Israeli in a sheet.
It never rains there, and you never hear of anyone coughing...or getting the consumption
or anything like that.
And no one has a job there, because all they do is stand around, eat manna, shake their fists,
and go to crucifixions.
Any time Jesus got hungry, all He had to do was to walk up the road...to a fig tree orange tree and have His fill.
Or if He wanted a pint, He could wave Hish and over a big glass...and there was the pint.
Or He could visit Mary Magdalene and her sister Martha, and they'd give Him His dinner,
no questions asked.
So it's a good thing Jesus decided to be born Jewish in that nice warm place.
Because if He was born in Limerick, He'd catch the consumption...and be dead in a month, and there wouldn't be any Catholic Church, and we wouldn't have to write compositions about Him.
The end.
Publicada por fado alexandrino. em Friday, August 14, 2009